Solemnity of St. Paul of the Cross Make your heart a living tabernacle of the sweet sacramental Jesus, keep him with you always, and embrace him often with holy affections because these are the arms of the soul.

September 15: Feast of Our Lady of Sorrows 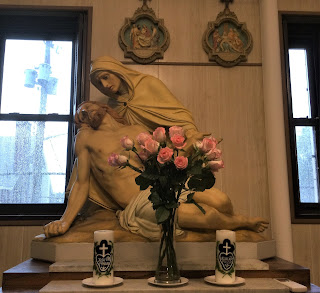 Throw yourself into the arms of Mary, Mother of Sorrows, and have recourse to her as the Mother of Mercy, and then do not disturb yourself; do not fret. Think only of entrusting and confiding yourself to God and in the merits of Jesus Crucified. I leave you in his holy Wounds and pray for you.

(From a Letter of St. Paul of the Cross to Lucrezia Bastiani Paladini, August 12, 1775)

September 14: The Exaltation of the Holy Cross 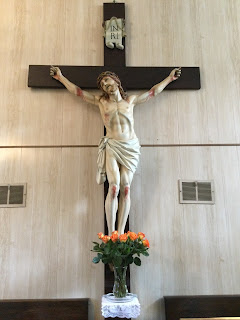 "I stop here at the foot of the cross.  I come close to it; I embrace it.  I kiss it, especially where it is drenched most liberally with the blood of the Crucified. . . .

My brothers and sisters, through the wounds of the Lord, let us plunge into the boundless ocean of God's love.  The apostle Saint Paul, our guide and instructor, says that Jesus, dying on the cross, wanted to show the ardor of his love for us.  The Crucified is a furnace of love flaming out on every side.  How many are the wounds, which are so many apertures through which the fire flares; how many the bloody lacerations, which are so many mouths crying out: Love, love!"

(From the book The Treasures Which We Have in Jesus Christ by Saint Vincent Mary Strambi, bishop)

Devotion to the Sacred Heart of Jesus 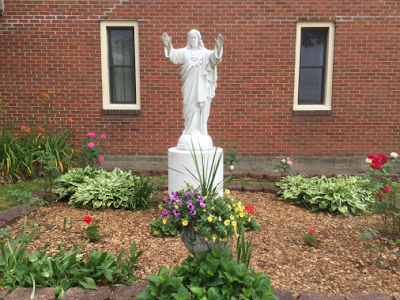 "I recommend to you a great devotion to the Sacred Heart of Jesus. Here is a way to practice that. You should visit the Blessed Sacrament frequently, especially at hours when there is no one there, for such visits are more pleasing to Him. Then prepare yourself with sentiments of profound humility and contrition. After that you must ask Jesus to admit you into His Divine Heart. Enter there in spirit. Love that Infinite Good there, praise and thank Him for what He has done and suffered for us, especially for having given us His life for food in the great Sacrament of Love, sacrificing yourself as a holocaust to the Divine Majesty on the altar of His Divine Heart and allowing yourself to be set on fire by the sacred flames which burn in that sweet heart. The Holy Spirit will teach you more if you know how to humble yourself."

Let Us Love This Dear Lover! 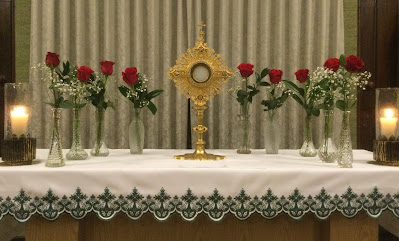 "When you approach the sacred altar, let your greatest aim in doing so be that your souls may ever more and more be dissolved in his holy love. Oh! dearest ones, I say nothing to you about preparation, for I think you do what you can. Remember, it is a question of performing one of the holiest possible actions. Our dear Jesus could do nothing more than to give himself to us as food. Then let us love this dear Lover and be very devout toward the Blessed Sacrament."

St. Gemma Galgani: Paradise is waiting for us! 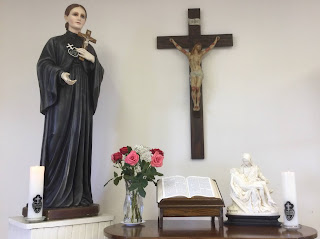 "Paradise is waiting for us.  If living for Jesus on earth makes us so happy, what must heaven be like where we shall see him in all his infinite greatness, goodness and beauty.  I hope for mercy from this Jesus, mercy for me and for all poor sinners.  If I could, I would atone for all their sins and mine."  (From the writings of St. Gemma Galgani)
at May 14, 2021 No comments:

Congregation of the Nuns of the Passion of Jesus Christ: 250th Jubilee 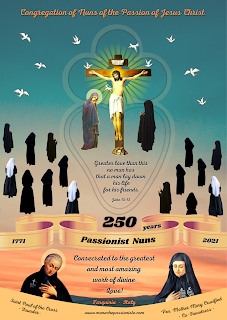 I rejoice in the Lord that His Divine Majesty has brought this holy work to completion, with all of you consecrated as Brides of the Crucified through your holy vows.  Now it remains for all of you to correspond with such a great grace.  Therefore, try especially to put into practice the holy directives given you by Father John Mary.  Let them observe their holy Rules.  Above all, they shall reveal the light of Christ's charity among themselves by loving one another, by sharing their sufferings in community, by being of mutual help to one another in their need, in a word, by being to one another a living witness of the Crucified, so that they may be splendor for this world, which has grown so cold.  (From a letter by St. Paul of the Cross to Mother Mary Crucified, co-foundress of the Passionist Nuns, May 29, 1772)
at May 04, 2021 No comments: 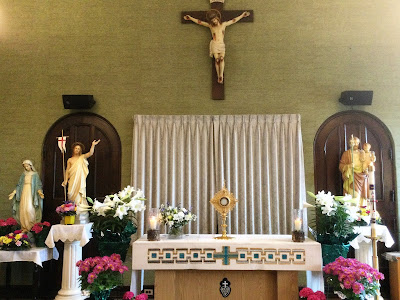 Alleluia--Praise the Lord! Oh! what a victorious word that is! This is the song of praise sung by the victorious citizens of paradise. Alleluia is not a sound found on earth; it is a hymn of paradise. To sing it one needs to be despoiled of one's old self and clothed with the new self, who is Jesus Christ, that is adorned with the holy virtues, for the acquiring of which our great and victorious Captain Jesus Christ paved the way. To him we sing Alleluia forever.  (From a letter of St. Paul of the Cross to Nicolina Pecorini Martinez, April 21, 1726)
at April 24, 2021 1 comment: 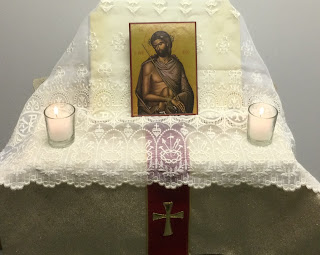 During these holy days I desire that your good heart receive the most penetrating impressions of that infinite love which, for our salvation, caused the most gentle Son of God to immerse himself in a sea of most bitter sufferings.  Thus swimming by holy contemplation in this great sea of infinite charity, you might be ever more enriched by those deepest treasures which the loving soul is accustomed to derive from that very rich mine of every virtue and every good.  For the same is totally transformed by love into Jesus Christ and enjoys the full, ineffable grace of his glorious resurrection (From a letter of St. Paul of the Cross).

Feb 27th: Feast of St. Gabriel of Our Lady of Sorrows 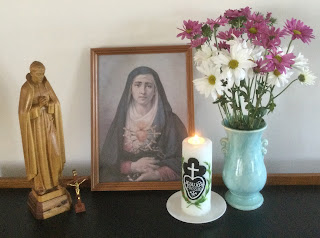 ". . . our perfection does not consist in doing big and exceptional things, but in doing well the common things . . . and those which pertain to our particular occupation, because the merit of our actions comes entirely from the interior dispositions with which they are performed.  God does not regard so much what we do, as how we do it." (St. Gabriel of Our Lady of Sorrows)

Reading biographies of St. Gabriel of Our Lady of Sorrows, one wonders how Francis Possenti went from a life attached to the world, to a life of almost perfect virtue practically overnight.  In the scriptures, Christ condemns the lukewarm.  These are the hardest to convert.  But those who are full of energy and enthusiasm, though attached to the pleasures of the world, once converted give themselves wholeheartedly to Christ.  Francis Possenti was one of these.  He was a young man full of life.  Though he was excited by the pleasures of the world, when his zeal was redirected towards the service of God he truly flourished and found what he was made for.  His heart was made to be wholly given--and he would give it totally to the world or God.  Like another young saint, Therese, he could not be a saint by halves.

What was Francis' secret to holiness?  How was he captured by the love of Christ.  The name he received as a religious reveals his secret: Gabriel of Our Lady of Sorrows.  He abandoned himself completely, totally to Mary.  He truly belonged to her.  It was Mary who called Francis out of the world, who gently rebuked him for dragging his feet in taking the step to become a religious.  Mary revealed to him the heart of her Crucified Son.  And Mary was Gabriel's secret to attaining holiness quickly and relatively easily.  St. Louis de Monfort, about a century before Gabriel lived, made the bold claim that indeed giving ourselves entirely to Mary is the quickest, easiest, and surest way to holiness.  He wrote: "we make more progress in a brief period of submission to and dependence on Mary than in whole years of following our own will and relying upon ourselves."  Gabriel did indeed reach sanctity in a brief period, dying at the age of twenty-four.  He gave up his will entirely, even his goal of becoming a priest.

St. Gabriel did nothing extraordinary to attain this life of virtue--nothing that we cannot do.  He surrendered himself to Jesus through Mary and lived his state in life faithfully, with all the zeal of a young man in love.  He did all for love of God and saw the eternal meaning in the tasks of everyday life.

The Way to Interior Recollection 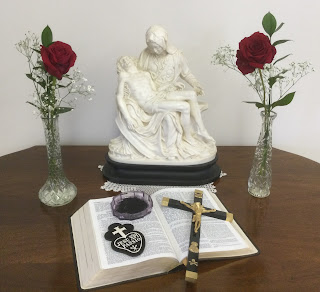 "You should not be philosophizing so much about yourself.  Walk in good faith, follow the footsteps of Jesus Christ, continue your prayer, and always base yourself on the Divine Mysteries of the holy Life and Passion of Jesus, our Life.  This is the secure way from which is born interior recollection, the gift of remaining in internal solitude in the Divine Presence, without danger of deceit.  Never should you leave sight of your Divine Exemplar, Jesus , in his sufferings.  'I am the Way, the Truth, and the Life.  No one comes to the Father except through me,' our Divine Master himself told us." (From a letter of St. Paul of the Cross to Thomas Fossi, May 30, 1752)
at February 15, 2021 No comments:

Solemn Commemoration of the Passion of Our Lord Jesus Christ: Friday before Ash Wednesday 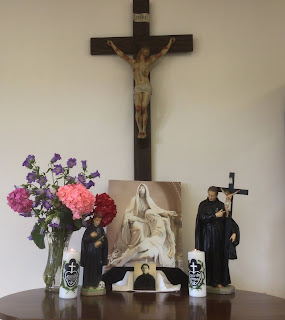 In anticipation of the Season of Lent, on the Friday before Ash Wednesday, Passionists celebrate the Solemn Commemoration of the Passion of Our Lord Jesus Christ, the Titular Feast of our Congregation.  On this Feast we contemplate the suffering and sacrifice of Christ, "the greatest and most overwhelming work of God's love" (St. Paul of the Cross)  We look to Our Lady of Sorrows and our Passionist Saints to teach us how to keep alive the memory of the Passion, as we remain with them at the Foot of the Cross.
"Happy is that person who, clothed with Jesus Christ and totally penetrated by his holy wounds, is entirely immersed and hidden in the immense sea of divine charity and there, detached from every created thing, rests in the bosom of the beloved Good!  The Lord does this divine work in humble souls who remain in interior solitude, even in the midst of the noise of this world's business." (From a letter of St. Paul of the Cross to Thomas Fossi, July 6, 1752)
at February 10, 2021 No comments: