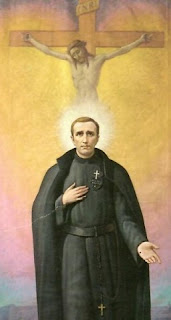 Blessed Isidore DeLoor was a true "son of the Passion," who was born on April 13, 1881 in a small farming town in Eastern Flanders.  At the age of 26, he left home to enter the Passionist novitiate as a lay brother.  He exemplified the Passionist spirit of charity, humility, simplicity, and recollection in his daily service to his religious community.  Much loved by his fellow religious and the laity, many called him "the good brother" or "the brother of the Will of God."  He was only 35 years old when he died from cancer.  Pope John Paull II beatified him on September 30, 1984.  We celebrate his Feast Day on October 6.

From a letter he wrote to his family:

"I cannot begin to describe for you the treasure which the Lord has given me by calling me to this state of life. . . It is my total submission to obedience--whether I am praying or working or sleeping--that is most meritorious before God, who never abandons his own who want to love him fully. . . Although it is true, my dear parents, my brother and sister, that you have not been called to my state of life, you may nevertheless, still sanctify yourselves and serve God faithfully by fulfilling completely what the Lord asks of you.  Do not become attached to the vanities of this world, since all will pass quickly." (From the Proper Offices of the Congregation of the Passion of Jesus Christ, 1985).
at October 13, 2019